See you in court

Consent, our new play by Nina Raine, revolves around a court case: two friends take opposing briefs in a rape trial. But the techniques they use to spin their side of events also crop up in their personal lives. The inherent theatricality of the courtroom can make for powerful drama. Here we look at some other great courtroom plays. Thanks to Lucy Morehen. 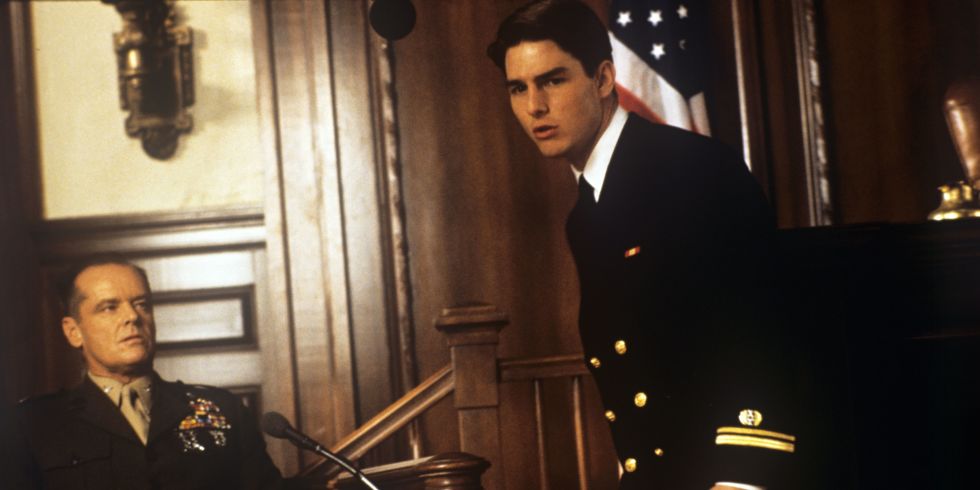 Daniel Kaffee is an inexperienced military lawyer, assigned to defend two US marines accused of the murder of a fellow marine at Guantanamo Bay. Over the course of the trial, the defence unearth a wider conspiracy around the murder, establishing the existence of a “code-red’ order – an extrajudicial punishment beating.

The play was inspired by real events and several people have claimed to be the “real” Kaffee, though Sorkin has said the character is not based on any one individual.

The Headlong/Almeida produciton of The Last Days of Judas Iscariot

THE LAST DAYS OF JUDAS ISCARIOT by Stephen Adly Guirgis:

Guitgis imagines a court cae to determine the fate of Jesus kisser/betrayer Judas Iscariot. The play uses flashbacks to an imagined childhood, and lawyers who call for testomines from people such as Mother Teresa, Saint Monia, Sigmund Freud and even Satan.

THE MERCHANT OF VENICE by William Shakespeare:

Shylock, a Jewish moneylender, quite literally demands a pound of flesh from merchant Antonio as the price of failing to repay a loan.

Bafflingly, Antonio agrees: the loan is to help his dear friend Bassanio pursue marriage. When Antonio’s ships fail to come in, Shylock takes him to court to demand his due. Why be lenient when he has been treated appallingly by Antonio and his circle for years?

Bassanio’s new wife, Portia, poses as lawyer and takes to the court, finding a loophole in the particular wording of the agreement, arguing that Shylock may take his pound of flesh but if any blood is shed, or the weight taken is not exactly a pound, or any harm comes to Antonio, Shylock will lose his fortune – and his life.

Jeffrey Archer’s third play cast the audience as its jury, and himself as Dr Sherwood, accused of murdering his wife. Two endings were prepared, depending on the audience’s vote.

Twelve nameless jurors must decide whether a young man killed his own father.

The stakes are high: during the play the jury are told if they reach a guilty verdict, it will result in the death sentence.

Twelve Angry Men explores the roles of race and class within a justice system that depends on the willing participation of its citizens. The play was adapted from Rose’s original teleplay of the same title in 1954 and made its Broadway debut fifty years later.

To Kill A Mockingbird, at Regents Park Open Air Theatre

TO KILL A MOCKINGBIRD by Harper Lee:

Lawyer Atticus Finch is appointed to defend Tom Robinson, a black man accused of raping a young white woman – an impossible task in the social climate, despite the significant evidence supporting Tom’s innocence. Lee’s genius move was to tell her Depression-era story through the eyes of Scout, Atticus’ young daughter.

The best-known adaptation of Harper Lee’s novel is the 1962 film, but the 1990 stage adaptation has been performed widely including a 2013 production starring Robert Shawn Leonard.

THE CRUCIBLE by Arthur Miller:

Three girls and a black slave are caught dancing in the woods by local minister Reverend Parris, whose daughter has fallen into a coma-like sleep.

Rumours of witchcraft fly about, and the resulting persecutions and trials engulf the town. But more earthly secrets complicates the proceedings, not least the past affair between one of the young women and John Proctor, a local farmer who is eventually hung for witchcraft, having refused to make an official confession that might save his life.

The Crucible is set amid the witch trials of Salem, Massachusetts in 1692. Miller wrote it during the administration of Senator Joseph McCarthy, to whose House Committee on Un-American Activities Miller had testified, but refused to name suspected Communists. Kevin Spacey in Inherit The Wind at the Old Vic

INHERIT THE WIND by Jerome Lawrence and Robert Edwin Lee:

Highlighting the cultural clash between science and religion, Inherit the Wind follows the trial of Bertram Cates, who has been arrested for teaching Charles Darwin’s theory of evolution. The small-town court case draws national attention with lawyers and journalists flocking in from all around.

It was based on the 1925 trial of teacher John T Scopes in Tennessee USA. In 1922, a legislator from Tennessee had argued that since the bible provided the basis for the American government any deviation from it constituted as disrespect to the law.

The play gets its title from the Book of Proverbs which says, “He that troubleth his own house shall inherit the wind; and the fool shall be servant to the wise of the heart.”

THE WITNESS FOR THE PROSECUTION by Agatha Christie:

A young man named Leonard Vole is arrested for the murder of Emily French, a wealthy middle-aged woman with whom Leonard has had an affair and who has made Leonard her principle heir.

Leonard’s wife Romaine testifies in the trial, not to his defence but as a witness for the prosecution. At first, her testimony seems a damning indictment that will see him hanged. But some of her evidence proves fabricated, and the case against Vole collapses. It is, however, a deliberate ploy: by playing an unreliable witness, Romaine secures her husband’s freedom.

Christie’s play was first published as a short story, and she revised the ending more than once.

A MAN FOR ALL SEASONS by Robert Bolt:

Sir Thomas More was the Chancellor of England in the 16th Century. He was charged with treason for refusing to approve King Henry VIII’s wish to divorce Catherine of Aragon in order to Marry Anne Boleyn. At trial he is found guilty, and the town gathers to see him beheaded.

The Catholic martyr’s life and trial are also the subject of Thomas More, a play written by Anthony Munday and Henry Chettle with contributions from other writers including William Shakespeare.

Based on the novel written by Amanda Brown and after the success of the 2001 film, Legally Blonde The Musical was nominated for seven Tony Awards and won three Olivier Awards. It tells the story of Elle Woods, a sorority girls who follows her ex-boyfriend in enrolling at Harvard Law in a bid to win him back by attempting to appear more substantial. At first look, people have little faith in Elle’s abilities, but much to their surprise in a dramatic court case Elle successfully defends exercise queen Brooke Wydham in a murder trial against her rich, older husband.

In 1924, reporter Maurine Dallas Watkins covered two unrelated murder trials, both of which featured a woman who had been accused of murdering a man. Both women were acquitted. She adapted the stories into a play, Chicago, which was much later adapted into the far better known 1975 musical.

Chicago exploits the jazz-age backdrop to the events in its music, and explores society’s expectations of women.

A MAN IN THE GLASS BOOTH by Robert Shaw:

Holocaust survivor Arthur Goldman is now a rich and eccentric industrialist living in luxury in Manhattan. He is kidnapped by Mossad, and taken to Israel to be tried as a Nazi war criminal, accused of running the death camp at which he claimed his family were killed.

Goldman’s own extraordinary defence at trial draws on myriad and far-reaching cultural and historical references, and leaves his identity in question till the end.

Shaw’s play, based on his 1967 novel and adapted with the help of Harold Pinter, was inspired by the trial of Adolf Eichmann.

The Scottsboro Boys at the Young Vic

In the infamous Scottsboro boys trial of 1931 nine African-American teenagers were accused of raping two white American women on a train. Their accusers make the accusation as a distractive ploy after being recognised as prostitutes by the police. So begins a painfully long trial process, in which their first defence lawyer is useless and a drunk.

THE TRIAL OF GOD by Elie Wiesel:

Three minstrels arrive at an inn in the city of Shamgorod. It is Purim, a holiday commemorating the defeat of a planned genocide against Jews. But when they discover that all the city’s Jews have been massacred except for the innkeeper, they decide to put their God on trial for allowing such carnage.